The Italian ice cream parlours of Glasgow have become something of an institution over the years. Many times they have opened their doors to an abundance of familiar locals, keen tourists and hungover students alike, in a longstanding tradition that has seen a number of them go from the most desperate and humble beginnings to becoming instantly recognised and admired throughout the city. It’s both the menus and the classic interiors that keep the punters knocking. In many cases though, the appeal lies within a proud and enduringly successful tradition to keep it all in the family…

The University Café was founded by Pasquale Verrecchia in 1918. Like many others before and after him, he left the uncertainty of an indigent Italy, seeking new ventures in one of Britain’s industrial cities. Glasgow was seen as a beacon for many, although this new promised land did not come without its disadvantages. Just after Italy joined the Second World War in 1940, Churchill gave the order to amass all those Italian immigrants without British nationality.

Like many others, Pasquale was viewed as an enemy of Britain and subsequently imprisoned on the Isle of Man. Alfredo, his son, went as far as abandoning his own Italian heritage and fought within the Royal Navy, but such efforts to release his father were unavailing. Pasquale was eventually released, although not until the end of the war. The University Café defiantly soldiered on, hot peas with vinegar and the double nougat their mightiest weapon! 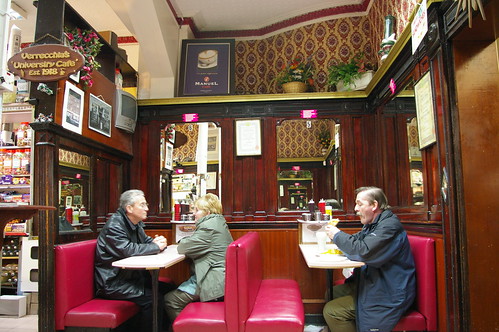 Nardini’s is probably the most famous of the Glasgow ice cream parlours, if not for their 32 flavours of ice cream consisting of double cream and fresh Scottish milk, then for the iconic brand name itself. For all of us as kids (and many adults), a trip ‘doon the water’ at Largs was scarcely complete without a visit to Nardini’s on the corner. Whether it was for ice cream or fish and chips, it was a fond tradition to visit that strange white building straight out of the past, exteriorly quite unchanged since its arrival during the summer of 1935.

The Nardini’s brought new life and excitement to Largs, with over 4000 people attending its opening all those years ago.

Sadly, the family are no longer involved in the business. The café in Largs even closed for a few years during the mid-noughties, though was renovated and refurbished in 2008 and is once again going strong. Thankfully Glasgow has its own, also on Byres Road (there’s a theme here), as well as sister ventures like the Marini’s chip shop, the Toni Macaroni restaurant chain and the widely popular Equi’s Ice Cream, all evidence of the surviving popularity of the name ‘Nardini’.

Rewind all the way back to 1895, before Nardini’s and even before Verrecchia’s own University Café, and you’ll find another budding entrepreneur with his sights set on Glasgow. Serafino Crolla set up his first parlour in Queen Mary Street, after swapping Italy for Scotland just before the turn of the century. It’s a decision that has defined four generations of family, with Peter Crolla, Serafino’s great-grandson, continuing the tradition into the present day.

They were responsible for30 ice cream vans and their very own ice cream factory by the 1950’s, and to this day have their very own Crolla’s Gelateria on yep, you guessed it, Byres Road. The success of Crolla’s cafés is evident in a multitude of shops and retailers throughout the city and beyond. Their iconic brand symbol can be found stamped upon the finest ice cream in little newsagent shops and ice cream vans, as well as in finer restaurants and established hotels. Considering over 120 years of business, it’s fair to say they’re doing not too shabby.

Molto scomodo (Awkward)!!! Crolla’s Gelateria is situated 2 doors down from Nardini’s, with the British Heart Foundation in between…

The success of these parlours can be honoured in a few ways. Partly, it’s the stubbornness of Glaswegians refusing to be put off some ice cream in the relentless rain, and even more so it is those who flock to these shops during the occasional ‘taps aff’ weather. Ultimately though, it’s the families that have orchestrated their success for so long. Whether the family-run businesses endure with the rising costs on Byres Road, it’s clear they’ve had a profound effect on our culture and for what summer means in Glasgow.

In some cases, they’re run by generations of the same family, and we as Glaswegians seem to love and respect that authenticity. With the likes of Nardini’s such circumstances differ, but it is a testament to their longevity and impact upon a sunny day down Byres Road or a trip doon the water that we’re happy to continue their legacy.

People Across Scotland are Saving Hundreds on Their Energy Bills!

Together at Christmas Event by GDA